The TSB has completed this investigation. The report was published on 23 November 2021.

On 13 November 2020, a Canadian National (CN) Beltpack yard assignment was switching within the CN Prince George yard. The crew lost control of the movement during the switching operation. The assignment ran away at Mile 462.4, on the Prince George Subdivision. The movement came to a stop within the yard. There was no collision and no derailment. No injuries were reported.

Map showing the location of the occurrence 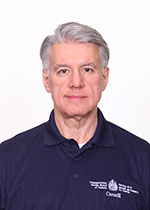 Don Crawford has many years of national and international railway experience. In his early career, he was a locomotive engineer with Canadian National (CN) Railway on its British Columbia North Corridor and Vancouver based territories and with BC Rail on the former BC Rail property. In addition, Mr. Crawford has experience in training and supervisory roles and was a staff member at CN's Gimli, Manitoba training facility. Internationally, Mr. Crawford worked in Kosovo after the 1998/99 war as part of the United Nations Peace Keeping effort helping to restore rail service to the country. Most recently, Mr. Crawford worked in Saudi Arabia as a locomotive instructor.